If there’s one constant in recent science communication, it’s the desire to paint a friendly face on the sciences. There’s scientists taking selfies. There are countless science TV programs like Bill Nye the Science Guy all the way to Wu-Tang Clan’s Gza making The Liquid Science Series for Netflix. That’s not even mentioning the tireless outreach by science personalities like Neil de Grasse Tyson and Michio Kaku. The friendly face serves two purposes – to be welcoming while also informing the viewer.

Larry Gonick and Dave Wessner’s new book, The Cartoon Guide to Biology (William Morrow) greets its readers with a warm embrace followed by some casual banter. (Our early favorite piece of comedy shows a shaman holding a mushroom while walking away from a dead body. He looks at the mushroom and says, “Okay, then, not THAT mushroom.”) The book takes a swing at making learning the basics of biology more palatable. Clever interpretations and cheeky asides add a bit of levity to topics not often viewed humorously, particularly by people with exams on the horizon.

At first glance, a book titled The Cartoon Guide to Biology would seem to magically transform a difficult subject into something immediately understandable. Safe to say, that book isn’t another interpretation of Biology for Dummies. What the book does very well is allow the cartoon format to help clarify biological concepts. Not only that, the informal presentation certainly lowers anxiety level when grappling with torturous things like the cellular respiration and photosynthesis. It’s like that professor everyone’s had that somehow makes things more understandable simply by communicating in a more relatable manner.

Gonick’s black and white illustrations feature a melange of characters including cavemen, smiling dinosaurs, fuzzy choloride-ion-creatures, all sorts of talking animals, and not-so-virulent looking bacteria. There’s very few bells and whistles and that’s a good thing. It allows readers to concentrate on the concepts being introduced. 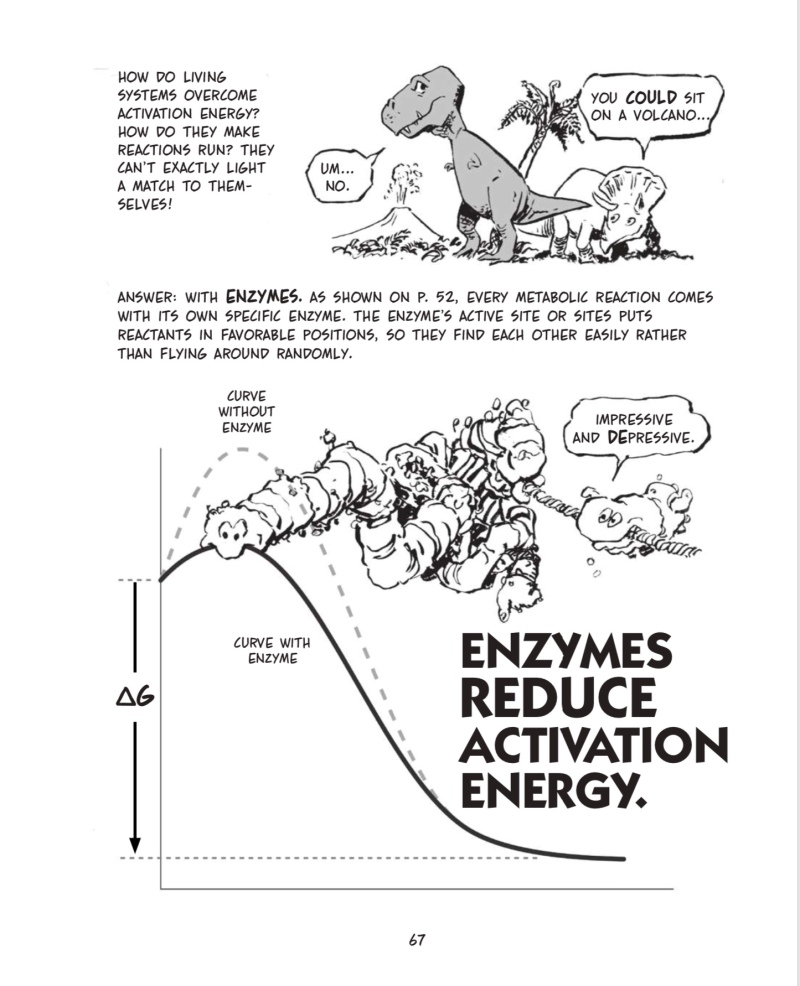 The illustrations shine when they illustrate concepts beyond just showing and actually explain what’s going on. A perfect example of how a cartoon achieves what a textbook cannot can be seen in the book’s section on replication. Gonick and Wheeler portray the relationship between a bound sigma factor and RNA polymerase. In the first panel, a sigma factor straddles a strand of DNA as a hapless RNA polymerase comes flying in its direction. The sigma factor catches the polymerase, holds it over his head, then smashes the poor polymerase into the DNA, separating the double helix just enough to become wedged inside. There’s a slight violence to the reaction which makes sense. The RNA polymerase is then tasked with holding the double helix open with both arms and legs, something it does with a fair bit of exertion. It communicates the fact that there are forces eager to bring both strands back together but work is being done by the RNA polymerase to keep it open. Of course, the RNA polymerase goes on its way from 5’ to 3’. In six frames it perfectly captures what goes into initiating transcription without being bogged down by details.

Something that sometimes goes under-appreciated in graphic novels/comics/cartoons (whatever you want to call it) is the succinctness of its prose. The real estate within a panel is limited so text descriptions and dialogue needs to be lean as a pork loin. In this case, form sets definite parameters on the author and illustrator and the results are positive. Gonick has a knack for distilling complex ideas to their essence without oversimplifying them.

For more information about Larry Gonick visit his website. To purchase a copy of The Cartoon Guide to Biology visit Harper Collins.