Few things epitomize today’s game than defenders pushing forward on offense, particularly with the resurgence of three-at-the-back (or five-at-the-back depending on how you look at it) formations. The addition of attacking defenders who are good on the ball can often represent the tipping point when teams flood forward on an offensive charge. We looked at the back line of Europe’s top teams to see how much they contribute offensively compared to each other.

If football were boiled down to the most basic-of-basics, the formula would be simple. Kick the ball into the net. Pull back one level (making the basic-of-basics simply basic), the formula could be expanded to this: Forwards score; midfielders distribute; and defenders defend. Even in today’s hyperfluid modern game of false-nines, tre-quartistas, sweeper keepers, and wing backs, if players fail in their most basic duties, their teams can only stumble.

That being said, it’s safe to say that the best teams in top flight football possess players who’ve mastered the bare minimum required from them. Their proficiency opens the door for managers to become more creative with their strategizing. Now, midfielders score or defend and defenders have the freedom to distribute and even score. Forwards are loathe to defend though, but to be fair, I’m not sure I’d want them to. Their job still revolves around placing the ball into the net.

This new fluidity of positions enables offensive responsibilities to be distributed to other positions. In best case scenarios, it relieves some of the pressure placed on forwards to score. On a more basic level, it opens the field up.

In terms of goals scored by defenders, Real Madrid tops the list with 10 goals among defenders. Most of Real’s goals comes from Sergio Ramos who has netted six. That’s pretty prolific for a defender. The remainder of goals are spread between Marcelo (2), Raphael Varane, and Dani Carvajal.

The second most goals scored by defenders belongs to Juventus with 9. Unlike Real, the distribution is more even. Leonardo Bonucci, Daniele Rugani, and Emre Can have two apiece while Giorgio Chiellini, Joao Cancelo, and Juan Cuadrado have one.

Liverpool and Borussia Dortmund share the third spot with 7 goals each. The Reds’ Virgil van Dijk stands out with three goals to his name. Interestingly, it makes sense that Liverpool place highly among defenders goals scored as they lead the top teams in goals scored during set pieces with 17. Juventus and Tottenham tie for second with 13 set piece goals.

Surprisingly, Manchester City — as close to a goal scoring juggernaut as it comes this season with 76 total goals — have defenders that have so far contributed 3 paltry goals. Paris Saint-Germain, who leads all teams in scoring with 79, are not much better. Their defenders have scored only 5 goals. 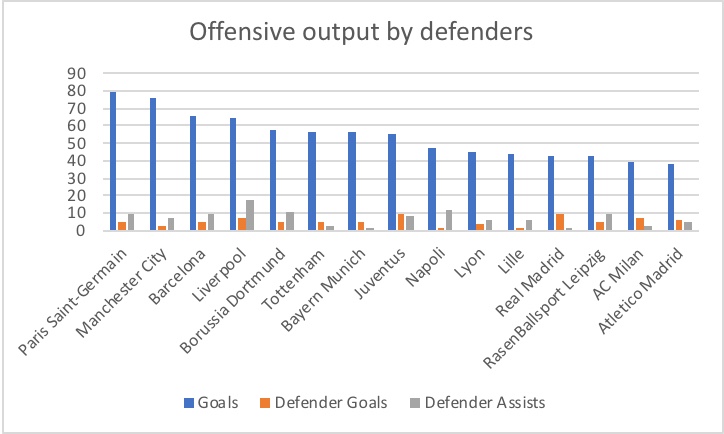 In terms of distribution, Liverpool’s back line is the most prolific with 17 assists. They are led by two young defenders, Andy Robertson (8) and Trent Alexander-Arnold (6). Trailing right behind them, Borrusia Dortmund’s defenders have 16 assists to their name. Like their English counterparts, two players make up the most assists, Łukasz Piszcek (6) and Achraf Hakimi (4). (One wonders whether this can be attributed to a Klopp-effect, active in the case of Liverpool and lingering in the case of BVB.)

One final note of interest, French Ligue 1 teams’ defenders ranked the worst in terms of scoring and assists. If you total PSG, Lille, and Lyonaisse’ numbers they’d account for 9 goals and 18 assists.

[NOTE: Players were chosen according to minutes played > 750 minutes. Midfielders that played defensive roles either formally or informally (e.g. holding midfielders) were included as defenders.]

The Scientific Inquirer needs your support. Please visit our Patreon page and discover ways that you can make a difference. http://bit.ly/2jjiagi. Alternatively, to make a one time $10 contribution visit our Support page.