As the season draws to a close, we’ve got to admit that we’ve been a little hard on the Boston Red Sox. Considering the bombastic absurdity of Dave Dombrowski’s pre-season declaration, we feel pretty much vindicated in spending an entire season watching how the Red Sox plan played out. The implosion was pretty steady, if not very spectacular.

But there were definitely some closers who failed to live up to their hype. Nobody fell short as spectacularly as the New York Mets’ Edwin Diaz. The flamethrowing righty notched 57 saves last season with the Seattle Mariners. He was mowing down batters without mercy as the baseball exploded from his lanky frame and convoluted windup. In 73 games, he had a 1.96 ERA, averaged 15.22 K/9 and 0.61 HR/9. He had a very respectable 3.5 WAR to end the season.

Then he was traded to the Mets along with Robinson Cano and some cash. For most of the season, the narrative around Edwin Diaz has centered around blown saves, lots of home runs, and him being one massively expensive flop. It started in earnest during a disastrous appearance against the Los Angeles Dodgers in the end of May. He surrendered four runs on only 19 pitches, handing the Dodgers a come-from-behind, walk-off win. At the time, Diaz described it as the worst blown save of his career. Pretty much everyone agreed.

As per Deesha Thosar of the New York Daily News, Diaz “wiped out the Mets’ big lead and allowed the Dodgers to walk off on what ill go down as one of the ugliest blown saves of the closer’s young career.”

Things only got worse. Diaz continued to get hit hard and long. A few weeks later, Diaz entered the game in the ninth inning against the St. Louis Cardinals with a 4-2 lead. Once again, he imploded giving up two runs to tie and then the winning run in the next inning. Two weeks after that, Diaz entered the game in the ninth against Division rivals Philadelphia Phillies. He was spotted a 3-1 lead. The Phillies ended up putting up a five spot on him, including a walk-off 3-run home run to Jean Segura. That particular game made radio sports talk host Mike Francesa apoplectic and dragged him into one of his overblown rants.

Diaz’s numbers indicate that he’s been a bit of a bust but not as bad as the narrative around him suggests. As a team, the Mets have been miserable from the bullpen for much of the season and have managed 31 saves of 55 save opportunities. Not good but far from the worst. His fellow bullpen mates, Seth Lugo and Jeurys Familia, have been abject from the mound.

Even Mets manager, Mickey Callaway, shoulders some blame. As per Metzmerized, “some blame can be directed towards Mets’ skipper Mickey Callaway, who has repeatedly unsuccessfully called upon Edwin Diaz to pitch in high leverage situations on back-to-back days (5.1 IP, 10 H, 5 ER, 2 BB, and 8 K).” 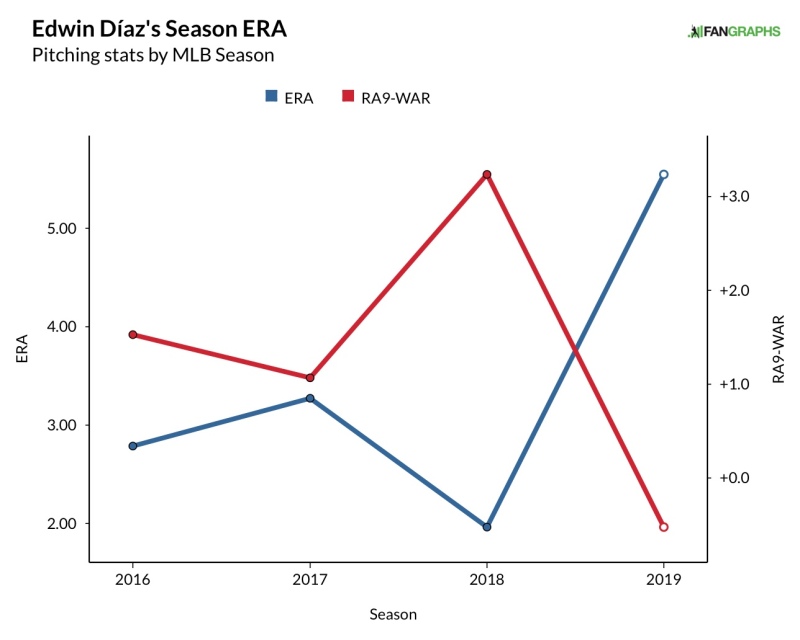 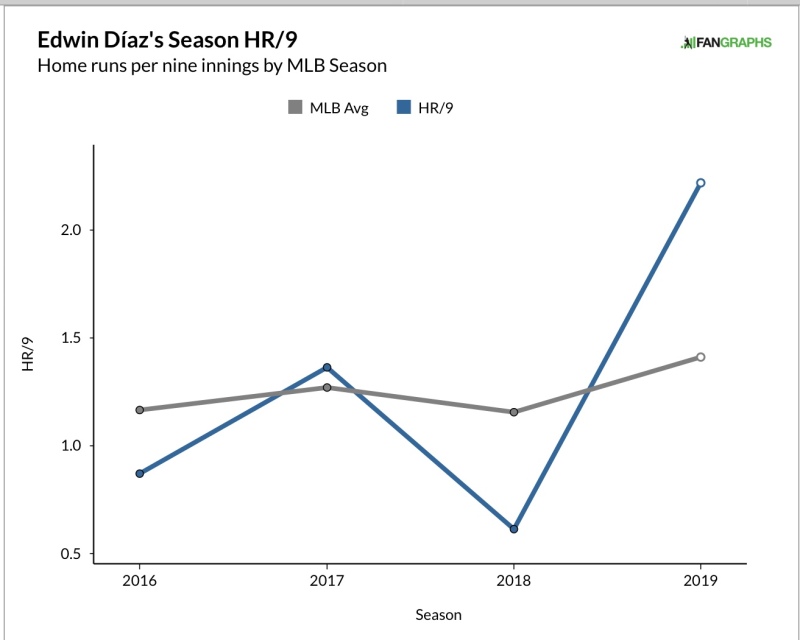 The exit velocity and launch angles of balls hit have both increased, accounting for his increased HR count. Add to that, 45.5% of batters’ contact is a hard hit. That’s up from 35.3% last season. His WAR plummeted from a respectable 3.5 in 2018 to an even 0.0 this season. Again, it isn’t pretty. 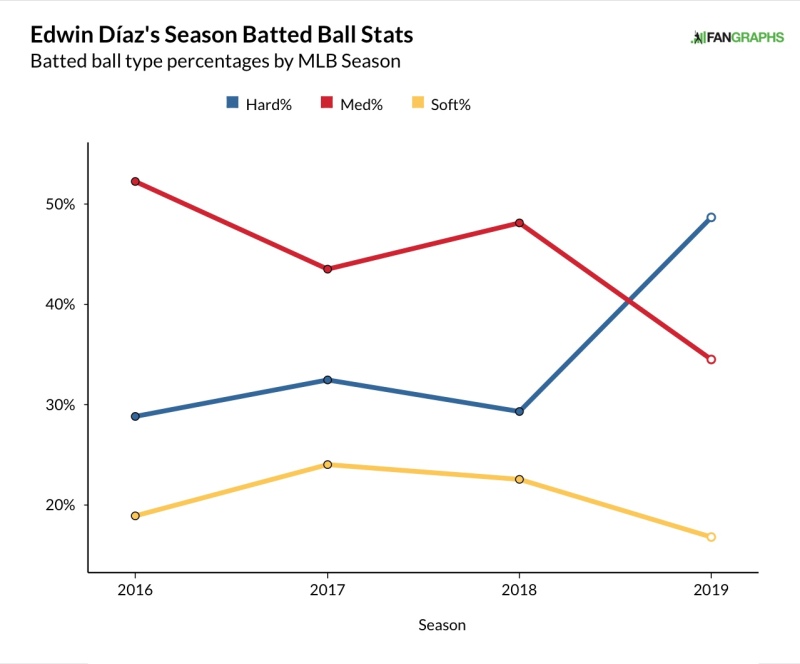 So is Diaz done? His numbers would suggest not. Or at least, his arm is okay. Two pitch pitcher for the most part. A upper-90s fastball and 90ish mph slider. Velocity of his fastball and slider has not changed. His control, however, appears to have suffered. Missing in the higher zone and also walking more batters when he’s not in the zone. He can get his control back. Lost velocity is a different matter.

After racking up four blown saves in traumatic fashion, Diaz has stemmed the bleeding a bit. To date, he’s blown five saves. Just to put that into context, the New York Yankees closer, Aroldis Chapman, also has five blown saves. None of them were as spectacular as Diaz’s against the Dodgers and Cardinals, but in the end, a blow save is a blown save, regardless of how ugly it was. The optics of Diaz’s outings have, perhaps, contributed to the idea that he’s been a complete bust. 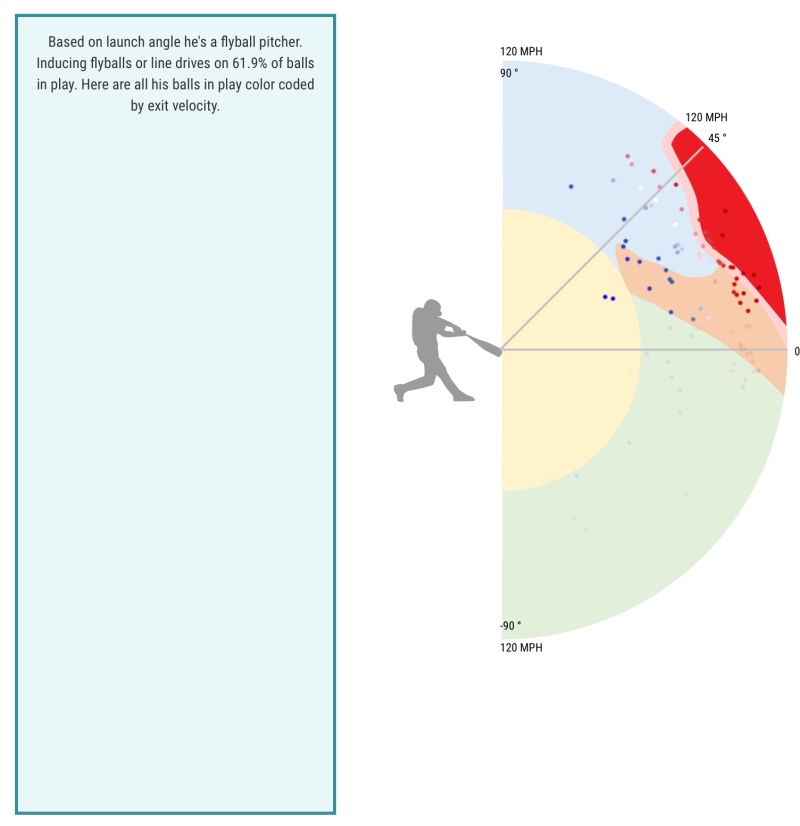 Moreover, he’s pitched well since the All-Star game, for the most part, and has looked like the lights out closer the Mets anticipated when they brought him over from Seattle. However, his last outing against the Braves featured an unwelcome return to the negative narrative surrounding Diaz. After surrendering a homer, Diaz had to leave the game due to tightness. The fact that the surging Mets are in the hunt for the final NL Wild Card spot doesn’t help.

Mets fans expected Edwin Diaz to be a game changer, instead they got something of a leaky like a pipe. It’s still in tact, though, so maybe everyone will just have to wait and see what they get next year. That’s when they’ll have a better idea whether his 57 save season was an outlier. For the time being, it’s too early to dump Diaz.